Motorcycles shops are typically closed sunday and monday. We  either needed to haul fast to sandiego or stall out in Los angeles where we could visit some of my friends. The fast haul was nixed so we spent time with some friends we were grateful could spend some time with us. A little time at the beach,  the bikes on the freeway and the  Griffith observatory 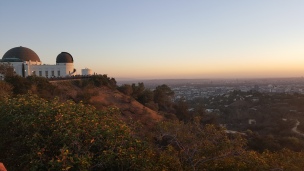 A great perspective of city, observatory. they have a Tesla coil demonstration.

We both have heard about lane splitting, but don’t know the rules associated with it. later we found out it’s the left two lanes on the freeway and only in stop and go traffic. It seems those rules are a bit stretched. We did some fun intense stuff on the freeway, but the camera batteries were dead…again. Monkey see monkey do, so we tried a bit of our own. In the city it seems the motorcycles go to the front during stop lights.

the first part of the video is coming into malibu along the coast, highway one. lots of surfing culture camped out on the shore to live surfing.

look who Maxxx found on the beach, daughter of a friend of mine 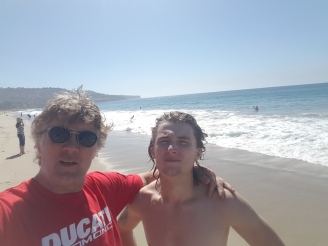 oh….and our shot too.

Maxx has not been feeling well all day. I rode him on my bike to the park from my friends house to see if he would feel better in time. That didn’t happen, so we rented a room at the local motel 6 and are waiting it out before we head to san diego for tires I have waiting there, and do an oil change before we head to Mexico.

A fellow motorcyclist we met at the observatory, easy and free motorcycle parking 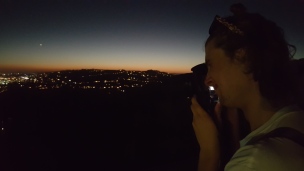 Maxxx taking some shots at the observatory

Maxxx also has set up a account on instagram for photos and other content. This is sure to be a great perspective from an 18 year old.

maxdamenphotography is how you can locate him on instagram