Maxxx was feeling better today so we road down from LA to  san diego. Picked up the tires I had waiting at a family members house, strapped them onto the back of the bikes and road to the Ducati shop and had them mounted. Motorcycle shops try to fit in traveling riders, and that’s what they did.

Quick change out of our protective gear and into street clothes, in the driveway of the shop.

while waiting for the bikes we hydrated from the heat. LA nearing 100. san diego about 95. So drink up or suffer dehydration. 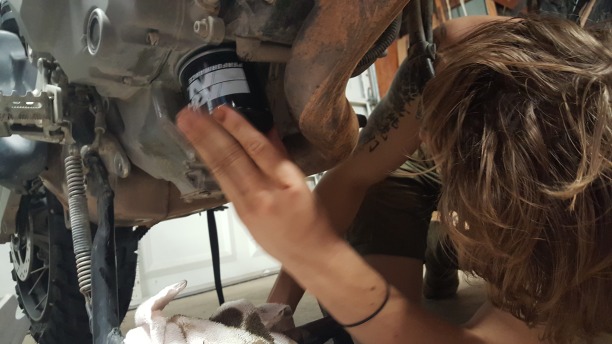 When we got back to our family members house we changed the oil in the bikes.Tires and oil all done to leave our familiar ground with 7k miles before we have to oil again, and we have new rear tires waiting for us in panama. Front tires last twice as long as rears, so only rears in Panama.

we also had some other items we had shipped to us in san diego. Old school film for a 35mm Maxxx wanted to bring, along with his digital camera. The film camera is one I have had for decades and dont use anymore, so its nice to see him take interest in my old camera. We figured we would like to protect our gear from casual thieves, so we purchased some cable locks from adventure spec in England . I wasn’t sure how they would work, but while on the road they seemed to do the job so I ordered more. I also shipped in a ram ball mount  adapter to screw into the bottom of a full size camera, thinking Maxx could use it to shoot pictures while it mounted on the bike. we’ll see how that goes, he initialy didn’t like the idea.I also had the oil shipped in, as I have specific oil that I like to use in the bikes….Motul ester based synthetic v300. the oil filters we carried from seattle.

Here’s Steph, a fellow Ducati Monster rider. She’s been riding her 2001 for the last nine years and just recently bought a car to make getting the dog around town easier…never stop riding Steph…I know I didn’t need to say that, cause it’s obvious you have the sickness. No more sensible purchases until you get another bike, never too many.