we left san diego and made the easy ride across the border. Biggest surprise was only one guy working at the border we talked to spoke any english. we easily paidn $20 for our tourist visas, but we have heard we needed to import the motorcycles temporarily but due to me owning both bikes they wouldn’t do it at the crossing, they can only do one vehicle per owner, they said ensenada could do it, but when we got there, a few calls to the boss man and, nope, they say La Paz. oh well, we didn’t want to go that far, we will see. a local in san felipe said we dont even need one, I have heard otherwise, we shall see. 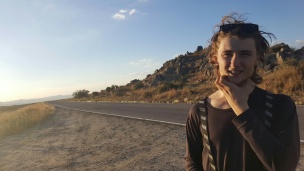 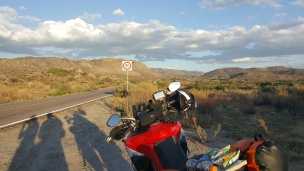 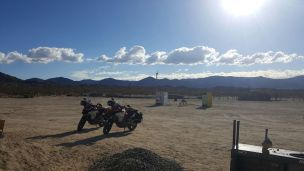 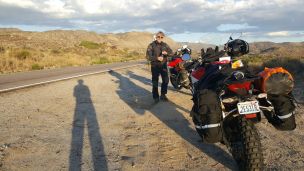 ensenada to san felipe is great scenery with many turns, so great for motorcycle riders, if you get car sick, this is not your road. the road from san felipe south is now paved so it is very easy traveling, not long ago it was a dirt road. the road out of san felipe it felt like we were driving through after the apocolypse, nobody in the resort areas and abandoned highrise resorts that are only partly completed. It seems their economy has been hit pretty hard.about 10 miles north of coco’s corner the road turns to dirt with detours around where the new freeway is being built. its dirt the res of the way to the connection with highway 1, about 20 miles total dirt. this was maxxx’s first taste of dirt on the new bike, I think he liked it by his talk after we stopped. we feel like we are pretty lucky.

heres a useful way to keep the bike stand from sinking into the ground. they make devices to widen the stand, but we keep liquids with us. 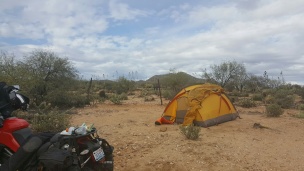 we spent the night off the highway, let’s call it a highway but it’s very narrow, at the turn off for Mikes sky ranch (famous to motorcycle travelers) and were able to spend some time with the cactus and other spiney plants.

we got off the bikes for a little break to hit the water, and it felt REAL good.

of course my batteries in the gopros are dead, but here’s some shots leaving california and riding on highway one in the very north. all the best scenery though, no shots. I am chrged up now and should have some good dirt shots in the next few days 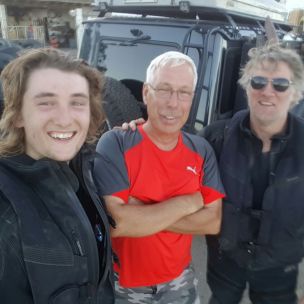 on the left is Mike, he just got a flat tire fixed, lives in La Paz now. We liked his mercedes, he has it outfitted for overlanding continents.On the right is the well known Coco, from coco’s corner, a must stop to get a drink and sign the guest book. Look coco up on the internet, long story, the short is he is well known as a stop for the baja races…and the only thing around.

We changed the oil in san diego and I changed bolts on the belly pan protection as the factory ones have too soft of heads and strip. 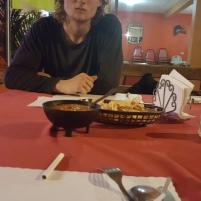