we left bahia de los angeles and the comfort of our pool and wifi and headed south on the dirt road. about 144 miles of it. Maxxx had only ridden  this bike a few hours in the dirt and today would challenge him a bit more. I did some off road prior to the trip to see how the bikes would do. In riding street and dirt, for us, the lead rider is key. The rider behind gauges speed and road placement off of what the lead does. if the lead goes too fast into the corner it will be likely those behind may as well, depending on how close you ride.On street we ride pretty close, on the dirt we found we have to give more distance just because of the dust, you cant see the track, thats a bad thing.

I started out leading as I wanted to see how Maxx did on the dirt dodging obstacles and handling the sand,and then  we leap frogged for about an hour and then I let maxx lead as he was enjoying the dirt.Temperature outside was about 90-100 degrees, so we were heated but doing well. Bikes were heated as well but fans were not kicking on so they were fine in these temperatures. 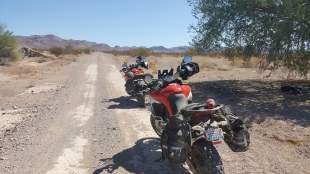 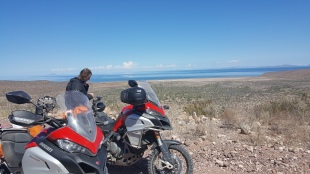 After about almost 2 hours Maxxx was starting to heat up, and we could just start to see the coast, so we hit the beech for a cool down, and it was nice!

Maxx was really enjoying the dirt. He was bombing down the dirt, committed, as thats what it takes in the dirt. You have to commit and go over whatever comes in front of you, especially with these heavy bikes, slow them down is fine, but you have to keep forward momentum. I was sooooo happy he was enjoying nit and doing so well. A proud dad to see him go for it.

The road twists a lot in and around washes and the hills,  with ups and downs so coming too fast around a corner and then another quick turn can lead to the brush.And did I mention this is a lane and a half for both directions of traffic. We came across very few trucks, but you have to expect they may be coming at you on that corner. 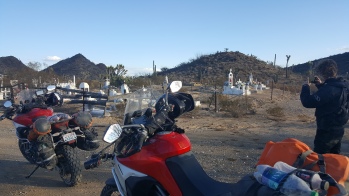 this is in the middle of the desert

the last 40 miles is very straight and boring, kinda lulls you into a trance, being aware of that we knew we had to stay attentive as the gravel can catch a tire and slip and then your off the road. 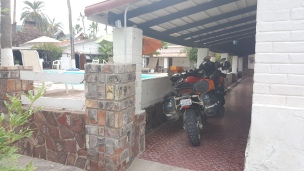 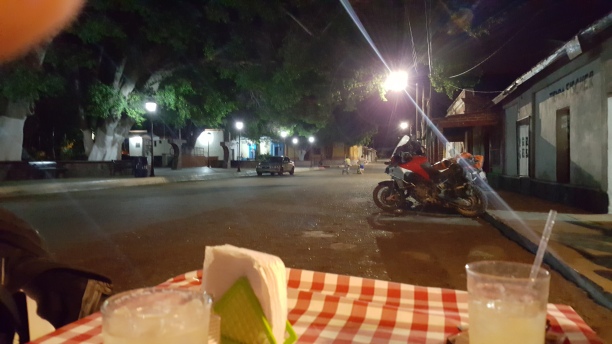 we decided to get tickets for the ferry from santa rosalia to guaymas on the mainland. We had two days to ride around catch the ferry, only had to travel about 30 miles to the ferry, but we rode down to Mulege and beyond to see the coast. First the local traport officials checked all the paperwork,checked meaning made sure we had it, then came out the dog to sniff all the vehicles and our bikes, thumbs up. 20 minutes later the army marines roll up and once more go over all the vehicles. Thumbs up again and we are clear to load. I will make a long boat ride into a short story. Loaded up, leave, 2 hours in a meth addict 5 days dry trys to jump overboard, return to port with marines waiting for him, leave agian to restart the 10 hour overnite crossing. Awake from laying across our comfy chairs, think airplane, to sunshine and mainland Mexico 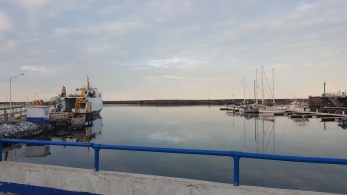 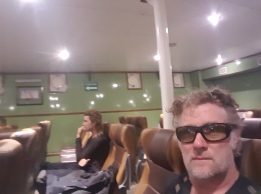 people from the road

food from the road 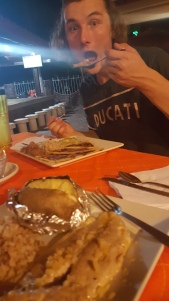 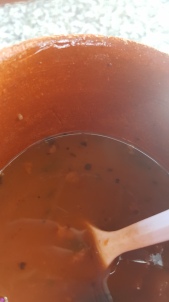 the first fix on the road.the handlebar end vibrated out on the dirt and , well….lost it.on the left is what its supposed to look like, left is fix with a socket and vinyl tape. I checked both bikes later that night for loose bolts. the nut holds the handguards in place.