getting out of mexico and into Guatemala at the border was much easier then we thought, kinda.

people along the way 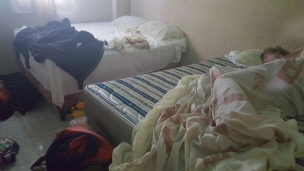 No real need to stop at migration, us, or aduana, motos, at the Mexican border since no one seemed to care or was even outside to check us. we did anyway though. no real issue about not having registered the motos in mexico. as we entered guatemala they asked us to stop the bikes in the middle of the road and have the bikes fumigated for agriculture purposes. People passed freely across the border walking and no one would have stopped us from just driving down the road. it seems to be the honor system..et caught inside without the right paperwork and I am sure your in for trouble and a hassle. all these countries have random police or military checkpoints. we are waved through many or asked to see passports.

We did stop at the guatemala border for migration, no problem, took minutes. no lines as we are the only ones here. aduana starts off easy and then they see I own both bikes. a tourist can only enter with one vehicle..hey say no go on the other bike. they say if we leave the bikes and go up the street to a lawyer he can write an official document, me giving maxxx permission to ride my other motorcycle. so off we go, but nope, lafter says he doesn’t speak English and we don’t speak Spanish so he can not make a legal document, that we won’t understand all the words. we go back to aduana and tell them this and feel we are screwed..e ask if we can pay them to make a legal document, a hint at a bribe, they say no. he thinks for a bit realizing we are screwed without the bikes entry..e says ok and makes it happen. he just puts maxxx name on paper as if he had legal permission. and he won’t take any money, the days of bribery are over. these people were very helpful and professional. so…..off we go

Small roads, steep hills with small brush and small teees..he terrain seem very rugged. seem quiet yet curious about these big bikes..his country only has small motorcycles, as much of mexico and central america..e see lots of old Toyota pickups..ike from the eighties and newer, their in great shape. we saw quite a few cars in need of help in mexico, not here. makes me fantasize about an import business of old Toyota to the states. we see crops, mainly corn. we don’t see machinery, most are small farms and likely planted by hand, steep terrain..ever have seen corn on a steep hillside before..t becomes even more evident, if your in the road your fair game to get hit. laws must be on the side of vehicles and everything know it. even the dogs obey the street rules…little kids like three know it too, we see many unaccompanied on side of road..eople packed in trucks, trucks loaded with goods and someone laying on too of the goods, seems crazy to us, but it works for them. many large trucks hauling goods have more like a open air frame in place of a enclosed box. usually someone is hanging on the back of the truck or on top, I presume to make sure all is good with the cargo, and it’s a place to ride for the helper when it comes time to unload.

We had some good offroad riding through some small towns. nothing tough, but fun to be on  dirt with the scenery. it started to get late and we want to be in our hotel by about six…hotels and the towns tend to shut down at eight…out after that and your probably asking for trouble. locals wake up early and go to be early. Evenings are a time to rest. No need to be outside late. If you are it generally not for good things.. Common sense rule I am sure many have paid the price for ignoring. we have a bit of trouble finding a place to stay this night, so it’s later and that means dinner is the small bag of potato chips maxxx picked up earlier in the day. stores only deal in cash and we’re running low, so time for cash machine tomorrow.

WHale hanging out trying to get wifi and unwinding maxxx reveals he feels five or six months is too long for him to be away. he feels he needs more time to get a job to earn money for moving to Germany and a Europe vacation with a friend next summer. we have planned on coming home for a week first week in december for myou son Brolins wedding..e feels that would be a good time for him to end his part of the trip.

This has been my worst fear, outside of one of us dieing, with him.. figured we have tough times and we cold make it through, as long as he doesn’t bale out on me..ell, no issues at hand and I feel he is bailing out on me..n the past my emotions would come over me more and I would react, usually not a positive thing. i listen to his reasons, tell him I don’t really agree and this is a heck of an opportunity we have. then I ask him to give me some space, while my mind races with all that this means. will I go on, will he make it through an agrument, doestrogen it make sense to send him home in panama since we have to stop and fly bikes to colombia? how much can I trust him, we made a deal we would go all the way together and come back together, aad now less then a month in he is cutting the trip in half, how can I trust his word. I have to trust my gut and instinct..ell, he’s 18 and anything can happen, he lives his life free flow, blowing in the wind. this is where that bites me in the ass.. decide to quit racing my mind and just see what happens. let’s just try to enjoy what time we have. the next day is a bit quiet between us. less radio talk and less fun happy comments..he road gives us time to ourselves, part of the joy of riding. we just need more time.

WHale on the road, we stop for a soda and this guy for some reason takes to me, gives me bread and baskets he bakes  and gives me a plaque cast in plaster that he makes and paints. he justices it all as a gift to me.. thank him, take pictures, strap it on the back of the big wondering how this will make it through the trip, I have no room, and off we go. the gesture is what overwhelms me more then the gift itself. how can a stranger care so much for another stranger, but I understand, as I find I care about him.

We enjoy the roads and scenery as we go through this country. people on the side of road appear from what looks like nowhere, carry machetes and endlessly look and carry firewood along the roads path. part of life for these people. weve enjoyed all the curiosity and stares while we ride tthrough.wen we do stop there is always someone to share our experience with, we want to feel the life of the people where we ride..e pick up dirt and put it into a small bottle.

Out of guatemala and into honduras.