With the bikes running now we decided to cut west and then head south toward a couple of salt flats. Most people don’t go to the first salt flat, they do the popular salar de uyuni. We figured why not do both and get some dirt roads in. The road is well paved and fast from oruro west to Huachachalla.heading south on a dirt road from huachalla it is pretty flat with mountains all around.a few minor water crossings, and then more. Most are less than eight inches, only a few get to a a brief twenty inches, not much concern as long as the ground below is stable and no softball sized rocks. Small pueblos  here, no crops, a few llamas, and lots of water around. Water not in lakes or ponds but sitting on top of the ground. It’s very flat here so water doesn’t have much direction.

After the town of Chipaya we  come across our fist questionable water crossing. There’s a foot bridge to the left small motorcycles can cross, but the ramp up is too high for our bikes, small bikes they hop off and the light bike climbs up, ours are too heavy for that. We walk into the water,  knee deep, but uneven and muddy bottom. We walk the river for a bit to see if there is another route, nothing we like so it’s this spot or we turn back, we go for this spot next to the bridge. 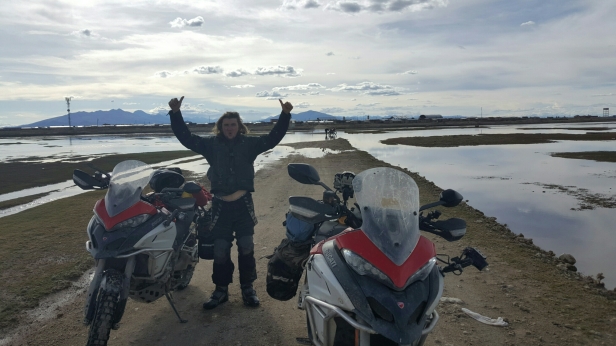 We ask the local helping us who was coming from the direction we want to go. He says it’s clear past the water we can see and the road is good. He says he will help us get the second bike across. All this not in English but our not so detailed Spanish. We decide going back is too far to back track, and the road is clear ahead, either way  one of the bikes has to cross. We decide my bike will now cross. I pick a route further right that I think will be better. This route proves to be much easier. The ground is a bit firmer and not as uneven for the tires to roll on. We  decide on my bike to help from sinking in we will remove allbthe bags to save weight.We still had to do the same push pull lift method but, my bike wasn’t  sinking as deep. I ride it out and we celebrate…all three of us. We couldn’t have made it out with the locals help. We give him what’s a large amount of money but small for us. The local then points to a route not on the road where it will be firmer. Maxxx and I are soaked just below our wastes and it’s getting late. We head for the route suggested.maxxx first again, and he’s soon stuck. The local sees we are struggling and comes to help push send lift the bike from the mud, he then says to follow him. We follow him on semi firm ground through a weave of water to where it’s supposed to be clear…..oh no….somewhere our communication is not working. It’s another crossing with what looks like clear road on the other side. We wade in again, we decide after the last ordeal we will not cross in the water. There is a foot bridge again next to the water crossing for the road. We walk it and don’t feel good, it’s got spaces between boards, narrow, questionable about taking the weight of the bike and us. We decide we’ve come too far to go back and the idea of crossing that last river again puts a bad feeling in my mind, like reliving a nightmare. The local agrees to help us again. We strip both bikes of their bags. Maxxx will ride the bike slowly while the other two of us walk behind on each side of what’s left of the bridge to keep the bike from tipping over.if the bike gets off balance and tips over into the water it’s not going to be good. Unlike the other bridge this on had ramps to it the motorcycle can go up. We slowly move forward. All feels stable enough, maxx is able to put his feet on the bridge boards to keep it balanced, it’s going well, then it’s over, he’s on the other side. We decide that went so well maxxx will ride the other bike as well and we will just repeat our jobs. This goes smooth as well and we all celebrate as we are now on a firm road. We grab our bags and put them back on the bikes. Maxxx takes a few pictures as the sun is setting very fast and we want to get away from here. 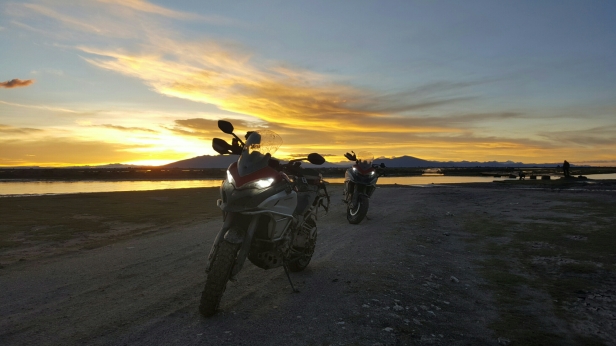 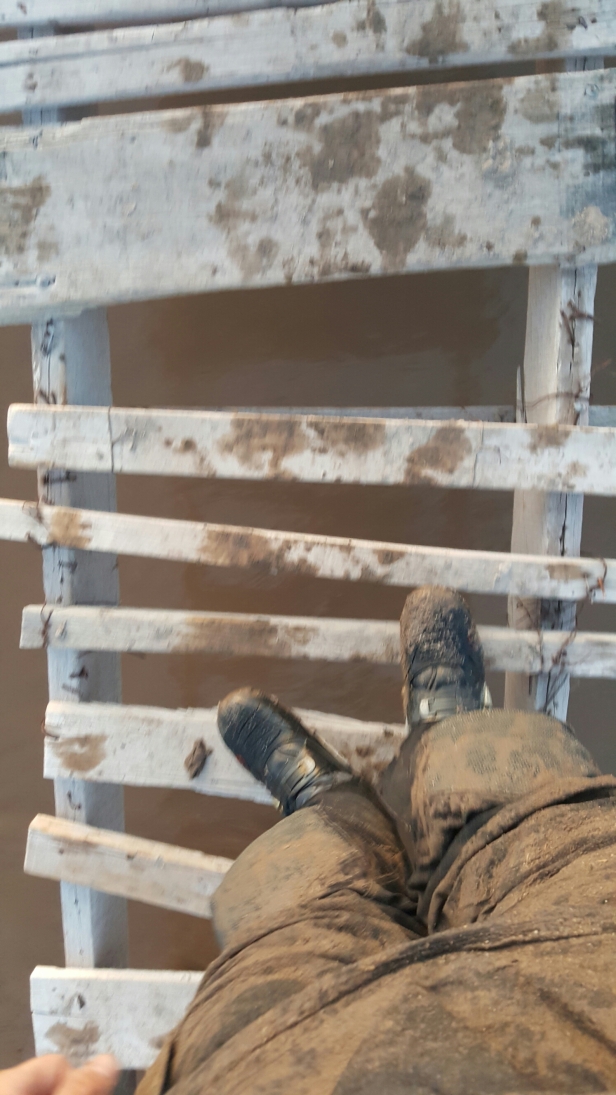 We say good buy to our amigo who helped us, and we ride off into the dark thinking we will get down the rode a ways and feel it’s clear ahead and this is behind us. We don’t get more then a half mile and it’s another water crossing. It’s not deep, but more of a surprise, it’s supposed to be clear from here. It’s more then what we want tonight so we camp in the road. We set up y he tent u d ingredients our cell phone light as our g lashlight have had battery charging issues. After the tents up its yime for soaked clothes to come off. Then put our gear in the tent. Maxxx unpacks his bags to get dry pants and discovers his sleeping bag got soaked from the crossing. Note….remove all bags before a potential deep crossing. We ring out his bag and try to air it out. I offer up my jacket for his legs as he sleeps.  Not the best situation for us but we make it through the night. …to corned of what’s ahead. Information and communication has not been reliable.

2 thoughts on “Oruro to Chipaya ”